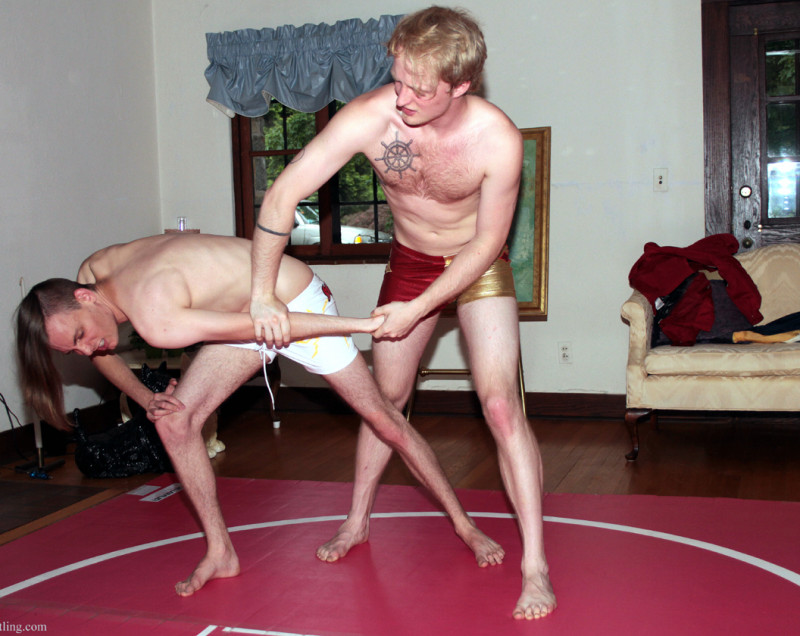 The STANDARD DEFINITION, 748 MB, 1920 x 1080 version of this video in the quickly and easily downloadable, hugely popular .mp4 format for a mere pittance of $9.95

In Kurt Mendelsohn, the generally genteel LRW federation has acquired a different sort of wrestler. Mendelsohn is a tatted up ruffian from the wrong side of the tracks who seems more intent on crushing an opponent than on merely gaining a victory in a sporting endeavor. Kurt enters the mat area to the tune of "All of the Lights" by Kanye West (a bombastic celebrity whose personality mirrors Kurt's in many respects).
In stark contrast to the egomaniacal Mendelsohn, Sean Evans is a well-bred, cordial, articulate young man who simply wants to display his athletic prowess. Wearing his white wrestling trunks emblazoned with the word, "Mizfitt," Sean makes his entrance to the ambient noise music of "Bone Scissors" (one of Sean's own compositions). Basically, this match will be a clash between a creative rebel and a bullying brawler.
Sean sets an incredibly fast pace at the onset of this contest; clearly the slender grappler plans to tire out his larger, more muscular opponent (in much the same manner that Triple F defeated Kyle O'Connor for the LRW Wrestling Super-Star Championship in our inaugural match-up). However, unlike Kyle O'Connor, Kurt Mendelsohn reacts to his opponent's frustrating speed and endurance by utilizing short-cuts and taking cheap shots (including frequent tugs on Sean's shoulder-length hair).
This extremely fast-paced video is 17 minutes and 4 seconds long. That includes the 12 minute, 13 second actual match (along with wrestler introductions), plus a brief, postmatch interview with each combatant.
When it comes to pure physical power, Kurt certainly has the upper-hand over Sean (as evidenced by each wrestler's attempt to execute an arm bar submission maneuver). Will agility and tenacity triumph over burliness and brutality? Buy this video and find out!!!